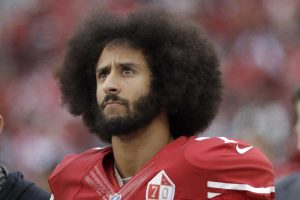 Note: Don’t be a Redneck.

Minneapolis, Minn…Yeah, I know…he wouldn’t stand for the National Anthem and now all of the God fearing patriots and NFL front offices are afraid to hire Colin on their team to take them to the Super Bowl; but what about Minnesota? Hey, I’m a veteran; I salute flags when I drive by them…I always will. I know what it means to be a patriot.

Minnesotans boast they’re the nicest, kindest and non-racist bunch of folks in the United States. Could we show the world that regardless of having the worst wealth and education gap in the U.S. between whites and blacks, we are a kind people and would like Colin to take our team, the Vikings to the Super Bowl in 2018? Stranger things have happened. ESPN staff writer Bill Barnwell penned, “NFL quality of play isn’t worse (but Colin Kaepernick might make it better),” asking the question, “Does the NFL have a quality-of-play problem? Over the first two weeks of the season, it’s fair to say that the league hasn’t exactly delivered much in the way of exciting action. Furthermore, if you really believe that there’s a quality-of-play issue built around offensive problems, there’s a quarterback sitting in the free-agent market who would be an upgrade for a handful of teams and a high-quality backup in case of injury for just about every other team. You can’t simultaneously make an argument saying that the league is suffering from a dearth of quarterbacks and also suggest that Colin Kaepernick doesn’t deserve a meaningful role in the NFL.”

But is this true? The only reason the NFL and and the mainstream dislike Kaepernick is because he stood up for Black Americans, you know, the guys and gals that were not human’s when the Constitution of the United States was written by some old white guys who owned slaves. Does this mean that America is moving backwards in a direction when people owned people? In an unrelated, but related story from The Guardian titled, “Median wealth of black Americans’ will fall to zero by 2053′, warns new report.” This report says that by 2020, median black and Latino households stand to lose nearly 18% and 12% of the wealth they held in 2013 respectively, while median white household wealth increases by 3%,” the report states. “At that point – just three (3) years from now – white households are projected to own 86 times more wealth than black households, and 68 times more wealth than Latino households (Lartey, 2017).

Colin Kaepernick could be the controversial shot in the arm Minnesota needs; I mean my goodness, the most winningest team we (MN) have are those wonderful Minnesota Lynx (Personally, I think the city should rename the Target Center, the Lynx Center – it’s only right).

But I know, Minnesota doesn’t like controversy but comfortable with it’s passive-aggressive behavior disorder and as people of color, we sit silent lead by people that look like us who have sold us out during the Tim Pawlenty administration (former governor of MN), and the current governor holds the ship on course firm and in the direction to disenfranchise any one a shade darker than khaki except for a select few house folks who like waking up to slave dust.

Yeah, I don’t like millionaire cry-babies either, but hell, Colin Kaepernick was letting American know that it has an issue with black people; sans the police shootings in every city in the United States of America, the people lowest on the food chain just happen to have a color, race and overwhelming disparities. Like the opioid epidemic, if the prejudice towards Colin Kaepernick happened to anyone else in another culture, there would be an official statement from the governor’s office on how we’d rid society of this heinous problem.

I say what do we have to lose? Let Colin Kaepernick be a Minnesota Viking.

1 Comment on "Colin Kaepernick could take the Minnesota Vikings to the Super Bowl?"