While a lot of Americans seem rather obsessed with saving fetuses, the value of a grown human colored in hues of brown and black seem to be on the decrease. 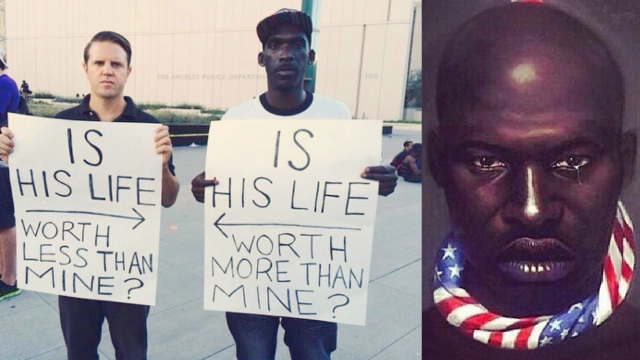 Social media brought national attention to the killing of Mike Brown in Ferguson, Missouri; in New York, Eric Garner was choked to death by NYPD; in Beaverwood, Ohio, John Crawford was shot dead in a Walmart while looking at BB guns; in Los Angeles, Ezell Ford was killed after police randomly stopped him; and in Victorville, California, Dante Parker was tasered to death by police after he was thrown from his bike because the suspected robber was reported to have ridden away on a bike. Parker had no criminal record and was unarmed, according to the San Bernardino County Sun newspaper and later police reports. None of the officers involved in these deaths were black or of African descent.

Historically, the Twin Cities has seen multiple killings of unarmed black men executed by police. In 2010, David Cornelius Smith, an avid basketball fan and member of the downtown Minneapolis YMCA, was executed by stun gun on the sixth floor of the YMCA by Minneapolis police. The video is too gruesome to watch. This is just one example of many murders by law enforcement of unarmed black men in Minnesota.

What is the difference between Ferguson, Missouri and the Twin Cities? Why does national media come to play in one and not the other?

According to a study called, “Operation Ghetto Storm,” compiled by the Malcolm X Grassroots Movement, “Police officers, security guards, or self-appointed vigilantes extrajudicially killed at least 313 African-Americans in 2012.” This means a security officer killed a black person every 28 hours. Their study’s sources included police and media reports along with other publicly available information. In 2013, the organization published a similar study showing that security forces kill a black person every 36 hours. However, this study did not tell the whole story, as it only looked at shootings from January to June 2012. Their latest study is an update of this. The report also notes that it is possible that the real number could be much higher.

In deconstructing the media interpretation of the assassination of black men, the narrative of Ferguson, Missouri, murder victim Michael Brown as being a “good kid,” or an “altar boy” who was allegedly on his way to college the Monday following his execution may not be completely accurate. Of course it’s not accurate. The only question that needs to be asked is if Michael Brown was an armed threat to the cop who shot him. It seems excessive to shoot someone eleven times, pausing between the sixth and seventh shot, with two execution-style shots to the head.  It seems apparent Brown was not a direct threat against an armed police officer. It does appear this “kid” was big enough to kick the cop’s ass and mop the sidewalk up with him. He was more likely a bigger threat to the cop’s ego than his life.

In some Minnesota classroom settings, students  read texts that describe the black body as “savage, angry, ignorant and dangerous,” with a vernacular far south of the assumed proper version of the King’s English. The historical description of justice for the black American, applied as “unofficial justice,” dates back further than Jim Crow. It continues to promote stereotypes that coexist in the denial of basic civil rights within America’s social, economic and educational constructs for black and brown Americans. With that said, the continual definitions of “true identities” and the mainstream media’s “creation of untrue identities” have birthed an ongoing social stratification characterized by historical devices that lend themselves to indicate the poor, and people of color will never have positive encounters or outcomes with law enforcement, the media or each other.

America’s law enforcement has always been the legal arm of the American sanitation of black and brown bodies. What took place in Ferguson, and what continues to be the juggernaut of American normalcy past, present and future is the targeted and designed arresting, imprisoning or killing of black men by some type of law enforcement, be it the police, or a lynch mob. In the broad sense, these killings send a disturbing message on many fronts: 1. Self-destructive behaviors are not always black and white; and 2. The same reasons some white police kill black men is the same reason black men kill black men; they see no future or value in the black body.

To understand the meaning of the civil war raging in Ferguson, we must be clear on how flat characters fit into a thick plot charged with white privilege, race-baiting, and racism.  We must begin by defining the meaning of normalcy in a manipulated society within a dominant-white patriarchal construct that cannot rescue nor redirect itself from historical assumptions of the black body. For example, saying a black male is “angry” has a far different meaning from saying a non-black student is “angry.” If a black person can identify a flaw-in-process to find a better way to complete a task, he’s trying to pull a fast one. If a non-black student sees the same flaw and works in an attempt to fix it, the response is: This guy is great! We should get him a job in the bosses office. In the one case, a single consciousness rewards privilege. In the other case, the student is damned by double consciousness in which he becomes the normative historical target of assumptions.

Questionable deaths, especially the deaths that provide a platform of tension and propaganda between blacks and whites make for good television news ratings. Like the police, the mainstream media has done a great job of hyping up the non-normalcy of black men. At this point, it is highly unlikely to separate real news from high-impact television and print news sensationalism.  CNN’s Melissa Harris-Perry was just downright upset. Using her bleeding-liberal bully pulpit, she repeated over and over again, “The Ferguson Police shot and killed an innocent black man who was on his knees with his hands in the air,” noting it was a white officer as if she witnessed the incident personally. Our “friends” at FOX News took to the tunnels posting alleged photos of Michael Brown from his Facebook page holding a wad of cash in one hand and what appears to be a 9mm handgun in the other. FOX wanted to make sure they promoted the message that all young black men are still “savage, angry and ignorant – dangerous.” The denial of facts and the distribution of untruthful information in support of the police state by FOX News in America is way more dangerous than any gun.

The iconography of a cold dead black body laying on a tarred road covered with a sheet, hanging from a tree, or burned alive by a mob creates a seductive voyeurism, which has been a part of American history and culture as long as there has been such.  So rather than stun a black or brown suspect, it is easier to shoot him dead. A historically designed “picnic” of the most irregular making.

It is unlikely the town of Ferguson will change in our lifetimes. The mainstream media has portrayed Ferguson, Missouri as a town of angry nonlogical black protesters, dismissing the fact the town of 21,203 (2010 census) is in the middle of a race war, fueled by an economic crisis. A report from ArchCity Defenders — a legal group that “works to break the cycle of ‘revolving door justice’ in the St. Louis metropolitan area” — reveals that in 2013, “the Ferguson Municipal Court disposed 24,532 warrants and 12,018 cases, or about 3 warrants and 1.5 cases per household.” In Ferguson, the “majority (67%) of  the city’s residents are African-American” and “22% of residents live below the poverty level.” Despite Ferguson’s relative poverty, fines and court fees comprise the second largest source of revenue for the city, a total of $2,635,400. According to a court employee, the docket for an average court session may include as many as 1,500 cases. Assuming an 80% conviction rate, the average fine in a case resulting in a guilty verdict would be $275.The local carnage happening over the last month and a half is a direct representation of what being poor and non-white looks like in a town with no opportunities to rise beyond the mundane. This is America’s finest model of designer oppression.

Today, those who command the definitions of human identity have once again reconstructed the definition of humans beings by unloading trash bags full of rhetoric and propaganda in an effort to maintain stereotypes. The American Dream as an urban utopia controlled by white masculinity that has historically been the headmaster in the circus of identity will not be swayed. If this group in the slightest thinks they will lose control, they can and have implemented dangerous and desperate measures, including mass genocide of economic bases for their red-blooded American counterparts – both black and white. The shameful part of the process is that poor whites and most black Americans are strained into a culture that is not their own by simply turning on the television set, picking up a newspaper, or listening to a song on the radio. This represents the intersectionality of many struggles in a nutshell.

The police have tried, found guilty, and executed in a split second many men (and women) from many ethnic backgrounds across the United States. Is this how the justice system is supposed to protect and serve? I predict officer Darren Wilson, the police officer who killed Michael Brown will not be indicted; out of the twelve members on the Grand Jury, he (Wilson), has nine peers with only three African Americans seated.

Those who are responsible for defining identities have always made sure social cleansing is never second-guessed. From cotton fields of Mississippi to the White House, the narrative of subjugation arrived at in the mainstream media, law enforcement and the court system have shown what happens when you are poor, young and colored; it has nothing to do with fairness. Author James Baldwin wrote, “This subjugation is the key to their identity and the triumph and justiﬁcation of their history, and it is also on this continued subjugation that their material well-being depends…This is why, ultimately, all attempts at dialogue between the subdued and subduer, between those placed within history and those dispersed outside, break down…the subdued and the subduer do not speak the same language.” You cannot have justice or peace within a framework of inequality; they are incompatible. This is the nexus of Black Sweat.