Does an ad-hoc board that has never announced their meetings have the authority to suspend and release a manager without due process? Ever 15-years or so, KMOJ has an uprising by a few folks who see dollar signs (It is never successful).

By Don Allen, former Economic Development Director of the Center for Communications and Development 1989-1990 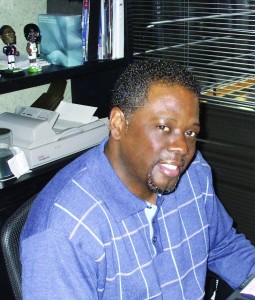 Station manager Kelvin Quarles – the man who brought KMOJ to the forefront of the Minnesota radio market, now attacked by an ad-hoc board.

I should start this as a letter addressed to the board of the Center for Communications and Development; but there has not been a CCD board since 1990. Let’s start first with a little history. In 1989, there were a handful of black men and women working in mainstream radio in the areas of sales and marketing; I was one of them. In August of 1989, the CCD board chairman, and one the original incorporated of the CCD/KMOJ Mr. Ronald A. Edwards put in a telephone call to my mother, Ms. Elizabeth Battle to ask her would she tell me to call him in regards to current events taking place at CCD’s media outlet KMOJ-FM.

I called Mr. Edwards and he offered me a job. The amount of compensation was based on my performance…there was a challenge; within less than four weeks, the station would not be able to make payroll. My first assignment from Mr. Edwards was to edit the underwriting file where after my lengthy seven-day investigation, I found that over $40,000.00 was missing and after contacting all the current underwriters who all said they paid the current station manager by check, cash, and “favors.” Needless to say, the next board meeting, the station manager was asked to resign, post-haste and to leave the station.

This was my first experience, an eye-opener that showed me what happens when absolute power corrupts absolutely.

My first job was to get CCD/KMOJ out of financial dire straights. I had a relationship with a local club owner who I asked for one night a week that we could call, “KMOJ-FM Night.” She agreed and thought it would be great for her club that had seen a serious decline in customers in the last four-months. This venture brought in enough money for payroll and to give some of the staff, originally hired as trainees more of a salary. (Note: Still today, there are people who work at KMOJ that should have left and been hired in the mainstream based on CCD/KMOJ bylaws and programming that have been at the station now in 2016 for more than 30 years.)

About a month ago, sources informed me that KMOJ-FM station manager Kelvin Quarles was put on suspension, then released from duties as station manager. Mr. Quarles and I never saw eye-to-eye, even when I thought it would be a great idea to use my many platforms as a news department for KMOJ, again, the station has not had a functioning news system since 1989 when a University of Minnesota political science major by the name of Heather Murphy came into the station and television news trucks parked outside waiting for an exclusive interview from her about the news she had just broke. That was then; this is now.

Regardless of my personal feelings toward Mr. Quarles, I took it upon myself to do a little investigation surrounding the change at the station.

What happened to Mr. Quarles outside of what I allege as Roberts Rules of Order and the founding bylaws of the CCD/KMOJ can only be explained as malfeasance and a lack of due process. This does not look good for the station, nor with the information I hold will prove beyond a reasonable doubt that actions within the station, by an ad-hoc board where illegal, never voted on and there is no way to back track and put fake documents in the FCC file; I hold a bookmark of items that by federal regulations should be in the file, but have no been there for more than 30 years.

Stay tuned for Part 2: What was the original mission of CCD/KMOJ and who wrote the five, ten and twenty-year plan for the station that was never followed?  His name, Don Allen.

1 Comment on "Part 1: What’s going on at the Center for Communications and Development and it’s subsidiary KMOJ-FM"