There is a difference between Wise and those who bask in unadulterated self-congratulation, fully donning the mantle of the White Savior.

On October 1, congruent with the university’s ongoing commitment to diversity, Hamline will welcome to campus anti-racist author and activist Tim Wise.  Wise will give the 2013 Commitment to Community Keynote Address, and ask how we can move beyond “post-racial rhetoric and politics,” in our “quest for racial equity.” 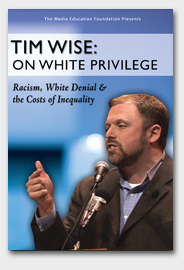 Preach…the USA still has no clue. (photo: bluetigerportal.lincolnu.edu – Fair Use)

As a white man speaking forcefully about racism and white privilege in the 21st century, Wise has made quite a name for himself, gaining ardent supporters and fierce critics of all colors and political persuasions.  He has authored hundreds of articles and blog postings, and has published six books.  His best-selling text White Like Me (2d. Edition 2011) was recently made into a documentary film.  Wise has been coined as “One of the 25 visionaries who are changing the world” by the Utne Reader, and scholar Molefi Kete Asante calls him “one of the brilliant voices of our time.” According to Wise’s Wikipedia page, he has given speeches at over 600 college campuses and “trained teachers, corporate employees, nonprofit organizations and law enforcement officers in methods for addressing and dismantling racism in their institutions.” While others fighting the good fight most often focus on black or Latino disadvantage, Wise squarely takes aim a white privilege, the “flip side” of racism.  His hard hitting rhetoric, often polemical tone and unfailing willingness to “call whites out on their shit” as he would say, make him a lightning rod for controversy, and have led him to receive death threats on a daily basis.  Wise is one of the most sought-after speakers on the issues of race and racism today; having made a career out of “race-speak.”

As a black man, I can say that Tim Wise is clearly the kind of guy you want on your side in a fight.  But I also want to take the opportunity to ask some hard questions about race, racism, and white privilege.  These issues may be summarized in the interrogative at the top of this page, “What if Author Tim Wise Was Black?”

Wise himself has written an essay in a similar vein, asking in a 2010 article, “What If The Tea Party Was Black?”  He argued there that if black protestors were to adopt some of the more rowdy and boisterous tactics taken up by White “Tea Partiers” protesting Obama’s “socialist” ways, that they’d much more likely be rounded up and arrested than regarded as patriotic Americans.

“Let’s play a game, shall we? …The object of the game is to imagine the public reaction to the events or incidents, if the main actors were of color, rather than white. Whoever gains the most insight into the workings of race in America, at the end of the game, wins.”

It is my argument that by looking at the career of Tim Wise, compared to the careers of innumerable race activists and scholars of color, we can also gain “insight into the workings of race in America.” It is the case, ironically, that the success and fame that Mr. Wise has achieved via speaking out against racism and about white privilege has come to him as a function of white supremacy itself.  In short, if Tim Wise were black, he would not be Tim Wise.

In an exclusive statement for the Oracle, Dr. Boyce Watkins of Syracuse University said, “I assume that since Tim Wise is known for his expertise in white privilege, he himself would probably not deny that he is the beneficiary of it. I appreciate the fact that Tim is willing to say things that black people have been saying all along . . . [but] the unfortunate truth is that they [whites] are more likely to listen to him than to the rest of us.”

Wise seems to get this, at least in part.  The title of his recently reissued White Like Me for example, is a play on John Howard Griffin’s civil-rights era text, Black Like Me. In 1959, Sepia Magazine had Griffin, who was white, travel throughout the south posing as a black man. Griffin had a doctor to darken his skin so he could surreptitiously travel freely and journal the difficulties facing black people.  Whereas Griffin set out to tell the story of the Negro problem, Wise tells a story of white privilege and advantage, writing about how he and others like him have benefited from whiteness at every stage of their lives.  Unlike Griffin, Wise sees racism not as a problem of people of color, but as a problem of whites.

But there is the thorny issue of opportunism to consider.  Too often, whites have benefitted economically and professionally, from the “business of anti-racism.” This is also known as the White Savior Complex.  In recent times, the White Savior Complex can be blatantly seen in Hollywood blockbusters such as Dances with Wolves (1990) and 2009’s Oscar-Award winning white savior fantasy film Avatar.

Consider also the “internet movement” spawned by the “Kony2012” video, highlighting atrocities committed by Ugandan dictator Joseph Kony.  As author Teju Cole wrote in The Atlantic of the white outraged generated by this video, “The White Savior Industrial Complex is not about justice. It is about having a big emotional experience that validates privilege.”  He continued, “[There is] feverish worry over that awful African warlord. But close to 1.5 million Iraqis died from an American war of choice. Worry about that.”

All too much white anti-racism today smacks the same self-congratulation of Avatar and of Kony2012.  It is the same self-congratulation that the nation has basked in as a whole since the election of our first “black” president in 2008—despite the fact that this president has done nothing to address the issues of racism or of civil rights, or to benefit actual black people in any way.

There is a difference between Wise and those who bask in unadulterated self-congratulation, fully donning the mantle of the White Savior.  Yet we must still ask, when do the sons and daughters of Africa get to their story themselves?  When will our own telling of our history, and our own anti-racist speech be seen as equally “visionary,” “bold,” and “brilliant?”  People of color must have allies like Tim Wise in the fight for racial inequality.  But must not get so caught up in the thrill of the validation of the white man that we think of people of color only as the helpless, hopeless and the conquered.

If Tim Wise were black, he would not be received with fanfare at so many universities across the U.S.  A black activist, speaking truth to power in terms as forcefully as Tim Wise does, would be regarded as crazy, as bitter, or as a crackpot.  A black scholar writing about white privilege in the terms that does Tim Wise would have a hard time receiving tenure at his/her university.  A black journalist, who routinely took whites to task for their racism, and wrote widely about white supremacy in the 21st century, would not so readily be asked to speak on CNN, appear in documentaries, or give book tours across the country.  That the hard truth about race is only palatable to whites when it comes from other whites must make one wonder how revolutionary that truth really is.

Be the first to comment on "What if author Tim Wise was Black?"