SAINT PAUL, Minn. – May 31, 2016 – PRLog — Matthew Erickson said, “It’s time make a difference.The people of CD2 have supported Congressman John Kline for many years. I represent the new generation of conservative politicians who respects what congressman Kline did during his tenure and plan to make sure the people of the district are afforded the same respect and unconditional representation.” Local businessman and political activist Matt Erickson will announce his bid for congress in the 2nd Congressional District of Minnesota at 11AM on Tuesday, May 31 in Saint Paul at the State Office Building.

Minnesota’s 2nd Congressional District is a battleground district in 2016. Republican incumbent John Kline, who began serving in Congress in 2002, chose not to run for re-election in 2016, leaving the seat open. Several Republicans have formally declared candidacy for the seat: David Gerson, John Howe, Jason Lewis and Darlene Miller. Pam Myhra (R) ran briefly, but withdrew in February 2016. At this time, Angie Craig is the sole Democratic candidate. Her competitor, Mary Lawrence, also withdrew from the race in early 2016. The primary elections will take place on August 9, 2016. The general election will take place on November 8, 2016.(WiKi) 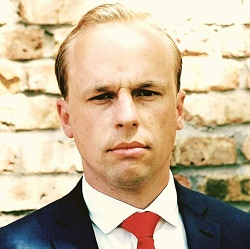 Now, a new challenger has entered the race: Matt Erickson.

Erickson, who last week flooded social and national media about his announcement to run in Minnesota’s 2CD with his campaign slogan to “BUILD AMERICA FIRST!” is set to deliver what Jason Lewis and Angie Craig cannot deliver to the voters; a direct approach to problem-solving keeping in mind that some of the largest employers are headquartered district: Thomson North American Legal, Blue Cross and Blue Shield of Minnesota, 3M, Lockheed Martin, Cambria, and Red Wing Shoes.The district also includes Pine Bend Refinery, the largest oil refinery in Minnesota, owned by Koch Industries.

Erickson said, “We cannot have flip-flop ideas (Lewis), nor a liberal agenda (Craig), that adopt laws that will run great businesses out of the district – and I must also remind you that my district is home to Minnesota’s most important rivers that run through the district: the Mississippi River, the Minnesota River, and the St. Croix River. This means a focused and detailed accountability of our waterways will be top-of-mind in my plans.”

Erickson’s appeal also resonates with the district’s Blue Dog Democrats who repeatedly voted for the former incumbent returning John Kline to congress. “I would like to follow in Congressman Kline’s footsteps and depend on the voters of CD2 to put me in office in 2016,” said Erickson.

Matt Erickson is a small business owner and will formally announce his candidacy for Minnesota’s 2nd Congressional District seat at the State Office Building press room at 11AM on Tuesday, May 31. Food and beverages will be provided.

About Minnesota’s Second Congressional District:
Minnesota’s 2nd congressional district covers the south Twin Cities metro area and contains all of Scott, Dakota, Goodhue, and Wabasha counties. It also contains part of northern and eastern Rice County including the city of Northfield, and southern Washington County including the city of Cottage Grove. Burnsville and Eagan are the largest cities in the district.

Three of  Interstate highways I-35 E and I-35 W merge in the district in addition to the north-south thoroughfares of U.S. Routes 169, 61, and 52 and the east-west Route 212. The suburban areas in the northern part of the district blend into the rural farmland in the south. The district’s economy includes agriculture, small businesses, and large corporations.