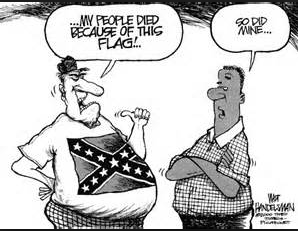 Political correctness is getting us in trouble. There needs to be a very important history lesson on why the Confederate Flag is no more a threat then spilled Kool Aid.

In 1865, with the main Rebel armies facing long odds against much larger Union armies, the Confederacy, in a desperate measure, reluctantly approves the use of black troops. The idea of enlisting blacks had been debated for some time. Arming slaves was essentially a way of setting them free, since they could not realistically be sent back to plantations after they had fought. White Southerners were concerned that if slaves had access to firearms, the blacks would turn against them and use those firearms to kill whites.

General Patrick Cleburne had suggested enlisting slaves a year before, but few in the Confederate leadership considered the proposal, since slavery was the foundation of Southern society. One politician asked, “What did we go to war for, if not to protect our property?” Another suggested, “If slaves will make good soldiers, our whole theory of slavery is wrong.” Lee weighed in on the issue and asked the Confederate government for help. “We must decide whether slavery shall be extinguished by our enemies and the slaves be used against us, or use them ourselves.” Lee asked that the slaves be freed as a condition of fighting, but the bill that passed the Confederate Congress on March 13, 1865, did not stipulate freedom for those who served. (History.com, 2013).

1860s, black volunteers for the Union army were initially rejected. President Lincoln wrestled with the idea of employing the help of freed blacks and slaves for the Union. For several years, he abstained from this idea for fear that the border states would secede if black regiments were created in the Union. However, in 1862 the number of Union volunteers plummeted and the untapped resource of black soldiers became more and more appealing to Lincoln and Congress.

At first, volunteerism was slow. Abolitionist leaders, such as Frederick Douglass, urged blacks to pick up the cause and fight for freedom. In May 1863, Congress established the Bureau of Colored Troops in an effort to organize black efforts in the war.

By the end of the Civil War, about 179,000 black soldiers had fought for the Union Army out of a total of 2,778,304. This number comprised approximately six percent of the total Union troops. In addition, about 19,000 blacks served in the Union Navy.

Former slaves fought in both the Union and Confederate forces; both saw this as a way out from slavery. Many movie portrayals like Glory (1989), gave an historical inside look at what dynamics took place as these once slaves embarked on a path to fight not only for Union and the Confederate, but also their freedom.

The Confederate flag comes in the play as an accurate representation of a time when one group of people did not treat another group in a cordial manner. Slavery, lynchings the killing of innocent black men, women and children and the Holocaust of generational suffrage that has evolved into such things as the achievement gap, mass incarcerations and police killings of black men; let’s not forget the overwhelming number of black-on-black murders every year in the United States.

The banning of the flag in public places such as government office buildings, schools, business signs, logos and t-shirts comes at a time when some in the United States feel the disappearance of the Confederate flag would mean the disappearance of racism, hate, homophobia bigotry and New Jim Crow (Alexander, 2012).

Thinking people know that banning a flag, book, or song has not done anything to change the way people think. This is a liberal attempt to amend history and hide the evolution of Jim Crow in modern day times. If you think about it, the United States still has a system of slavery; black men are killed on a regularly by an armed clan and in some cases, we are treated as less than human. A flag cannot discriminate; hate or kill.

The Black men and women that fought for the Union and the Confederate, including those who lost their lives understood the mighty risk of picking a side. Black people wanted freedom. Fighting for the Confederate Army was a chance at freedom, for some, the last chance. The Confederate Flag represents an ugly time in the United States, but one that must be preserved and researched – but not brushed away because a few politically correct zealots have deemed “a flag” offensive. If the United States (and the liberal zealots) focused child molesters in the church, black-on-black crime, jobs, employment and education, the flag would be recognized as what it really is…a flag…nothing more but a piece of clothe and colors with a history that should be told, displayed and reflected on. Most of the time, “Made in China.”

Black History is far-reaching. If the history of Black people in America were taught correctly in public schools (although I know many great teachers do their best), we would understand the struggle of Cultural Melancholy (Singleton, 2015). With good intentions Black people (former slaves) fought for the Confederate Army paying the ultimate price for freedom under the most intense humiliation and sometimes death.

The Confederate Flag is just as much a part of Black History as the Underground Railroad. Let it be written, let it be told, let it be learned.