At this point in the Twin Cities, the only stakeholder that really matters is the slayer holding the hammer and wooden stake above the hearts of poor and black learners while intellectuals continue to meet, socialize and one-up each other.

Collective Impact should be a commitment of a group of intellectuals from different sectors to a common agenda for solving a specific social problem, using a structured form of collaboration. Collective impact should bring people together, in a structured way, to achieve social change. Collective impact initiatives have, and are currently, being employed for a wide variety issues, including education, health and healthcare, animal welfare, homelessness, poverty reduction, and youth and community development. In the Twin Cities, collective impact models have been compared to social cabals connected, one-sided to a liberal agenda and a political party of “friends,” who would never be held accountable for any failure of public school children; especially children of color. If local collective impact groups are promoting such great successes in their commitment to the education of minority learners, especially African American boys, then why is the proficiency for black students in third grade less than 70 percent? Numbers from the Minnesota Department of Education for St. Paul Public Schools (black children) shows third-grade proficiency in 2013: 37.2; 2014: 41.1; and in 2015: 36.4 percent…this number represents 2957 students of which 1881 are not proficient (63.3 percent). 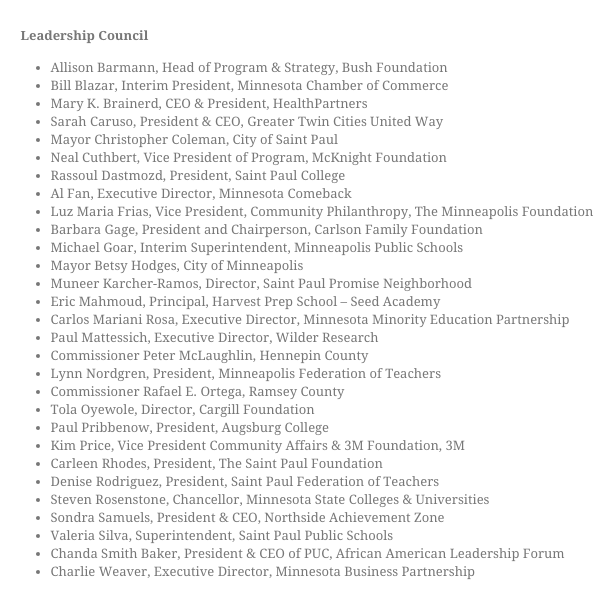 Do any of these names look familiar to you? Look very closely.

While these organizations might be committed to education, they are not working, staff and management for free; most of these organizations are supported by local philanthropic groups who have staff to  sit on the boards to ensure these “pet projects,” and their friends are financially supported. (See Figure A)

Maybe you are familiar with some of the Twin Cities collective impact organizations and models; Northside Achievement Zone (NAZ); Generation Next, Minnesota Minority Education Partnership (MnEEP); African American Leadership Forum (AALF) and many more who have yet to change the trend of students of color in Minneapolis and St. Paul’s public school systems…but hell, they’re working on solutions…(sarcasm font).

Some of these CIO miss the point all together. For example, 100 percent of children at age two are ready-to-read, the absorbent-mind this there naturally. So where is the CIO that is contracting with Mom, parents and caregivers to develop a seamless flow to make sure at-risk, poor, minority and white pre-kindergarten learners are developing the skills to be read-to-read?

Why all of a sudden is CIO’s a spectacle to be part of the intellectual social talking points? Emmett D. Carson, CEO of Silicon Valley Community Foundation, in a story for the Huffington Post wrote, “The concept of collective impact appears to be at a fever pitch throughout the nonprofit sector. Collective impact is center stage at nonprofit and foundation conferences and there are now webinars, seminars and trainings about how to implement this approach. Unfortunately, a close examination of the concept suggests that even under ideal conditions it appears difficult to achieve and, in some cases, may undermine key values of the nonprofit sector.”

Not to mention the undermined community of color that rarely participates at this level of engagement. In the Twin Cities, the majority of education organizations outside the district are led by either white men or women, or minorities who have been given a pass because they might deal with minorities other than black learners.

Carson says, “Equally troubling is the underlying belief that nonprofits have secret knowledge that magically eludes foundation boards and staff, many of whom were recruited from the very same nonprofits.” (See Figure A)

When looking at the leadership council list of Generation Next, ask yourself: “What challenges has any of these folks really fixed?” It is my assessment, unlike any business, or nonprofit, there are challenges that cannot be addressed because of the people who are “allowed” to come to the table. Not one person has the knowledge about how to solve any education gap; collectively, it is important for CIO to continue their “missions” regardless of outcomes; as seen in both the Minneapolis and St. Paul school districts.

I’m like everybody else…a sucker for a shiny brochure and PowerPoint presentation that says how great everything is going to be and how the numbers have increased .00001 percent (yeah, we are on the rise!). In reality, where I am based, the fact remains black boys and black girls, poor whites, Native Americans, Asian and Somali learners have not benefited from collective impact organizations or models in the Twin Cities.

In closing, I received an email from a local collective impact organization that said they would go to rural Minnesota to seek answers for the inner-city folks. Sounds like a fun field trip to me.