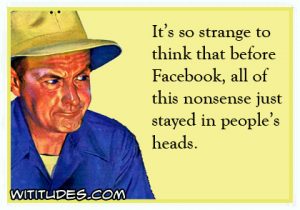 …no, I have no conversation for you in Target; that was Facebook, this is real life. (True story)

I love Facebook; it’s as simple as that. The social media giant of connecting nouns (people, places and things) have been a daily stable in my predominantly argumentative concerns about politics, people and process. The “Three P’s” have provided me with enough context-in-content to post interesting topics, concerns and facts that in most cases are undeniably telling about our society and the people –  some self-appointed that don’t really give a damn about resetting communities across the United States in need of a reset. Yes, my friends, this is the state of my people in Black communities used as petri dishes of disparities so that local community poverty pimps can say, “We need this program to help the poor Black people.” The funny thing is, when was the last time you saw a white man or woman stand up in any meeting and say, “We need this program to help poor white people”?

Lately, the social media giant (Facebook, if you lost track of the title), has been buzzing with liberal zealots and right wing activists concerned about the Trump presidency. As I read the misdirection’s, misinformation and the outrageous of Black youth fight-videos, it concerns me that somebody is not keeping anyone accountable for all this excitement…is that the institution of the Book?  Could the utility of Facebook be mainly to distract? Unfortunately, while it all becomes exciting click-bait, there should be some concerns about who you communicate with; what you say, and how you say it. What I found out over a couple of days and nine-years on Facebook, there are some crazy people in this world and many of them hang out on Facebook.

My wife knows I hate shopping; especially after she’s been at Target for three-hours and comes home and says, “…honey, I forgot bread” – the foundation of peanut butter sandwiches for a four and six-year-old. Begrudgingly, I head down to the garage, stopping at my desk to grab my wallet, wedding ring and watch to head out the door. The Target by my house is a massive red and white powerhouse of lights, noise, people and indecision; the mere fact that I must go into the store creates great anxiety in my inner-self. To prepare for this trip, I have an Apple Music file on my iPhone called “Target” –  it’s a variety of music from David Bowie, Prince, AC/DC and Kenny Loggins that keeps me sane during this shopping adventure. As I pull into the parking lot, packed with every human in the area, I stop briefly at the crosswalk to let people cross who are determined to get into the store for a shopping experience of sometimes buying stuff you don’t need…but that’s Target’s hook: Come for milk, leave with bedspreads and curtains.

This time, I was lucky…got a parking space by the door right next to the shopping carts; so far, easy. As I mouthwateringly looked over at the Pizza Hut food stand and pushed my cart toward the produce, a couple of weird things happened. There stood a man and woman, who I have never met, but the way they looked at me was incredibly “friendly.” I proceeded to the isle with the bread and I was being followed. As I turned around to confront these stalkers, the male yelled, “Hey Don Allen, how are you…my name is Tony…the woman said, “I’m Sarah, just a friend who lives near here and I caught a ride with Tone.” This was all great and wonderful, but I asked, “Do I know you?

Both Tony and Sarah smiled and chuckled a bit… “We’re your friends on Facebook.”

Oh shit… I said to myself, I hope these two aren’t some liberal idiots wanting to confront me on Global Warming or why Trump should be impeached. I gave a slight smile, nodded my head and said, “What can I do for you?”

“I’ve been following both your pages and did you know you’re in 15 arguments, three women are hitting on you and you spelled a word or two wrong.”

Rather than telling Tony to get screwed, I took this moment as a learning-moment in the study of Linguistics and the use of language and expressions between a small group of people. I asked Tony did he get paid by Facebook to monitor my or any other accounts? The look in his face; scrunched up and unsure of what I was asking could have been considered as a moment of awakening for him; Sarah was rather quiet, probably catching on I was a little disturbed by Tony’s CIA-like spying on my page, and of course my wonderment about why the hell he thought that was important.

I explained to Tony and Sarah that I don’t know all my 4000-plus friends on Facebook and only 10-percent engage with me and I’m sure more than 50-percent don’t agree with what I say, but damn, I’m not expected to know you in-person, on-site in a Target store just because you’re my friend on Facebook…it’s not ever going to happen.

I guess it’s okay to introduce yourself if you run into me in public, but don’t expect me or any of your Facebook friends to want to dialog outside the social-media app; it’s a new day in inner-personal communications and the old-school way of going out and talking to someone face-to-face went away when Facebook created a narcissistic, self-centered posting mechanism of a timeline that all your friends see.

Today, conversations are for Facebook, not real life…and that’s never a good thing.