Minneapolis mayor Betsy Hodges is wrong. It’s an election year and she just played her hand to show all the Minneapolis voters she’s the queen of political payoffs, backroom deals and an advocate for keeping downtown Minneapolis in chaos. #BandAidBetsy

(Editorial)…Minneapolis’ black community has always been divided when into two specific groups when money hits the table. Group one are the folks and organizations who always seem to “get the money” with little to no successful outcomes. Group two are the group who are the grassroots, hardworking folks that actually have a plan, but are intentionally overlooked by philanthropic-political pundits in favor of keeping things as they are. The Minneapolis mayor, who is currently running for what some say is the toughest re-election bid in Minneapolis mayoral-race history is not a surgery-cure type mayor; she’s a band aid mayor…once again, she uses her power of box-opening to pull out another band aid to make what we allege as another politically-driven outreach grant to make sure downtown Minneapolis is safe. Since the announcement of this particular band aid, there have been several beating, robberies and women shot in the head. It seems that money in the wrong place does what it always has for Minneapolis…nothing.

If I was on the Minneapolis City Council, I would question mayor Hodges funding of Day Patrols on Hennepin Avenue. I know she wants to be re-elected as mayor again but the black folks she’s granting money to don’t hang out in downtown Minneapolis after the sun goes down. Hell, if the mayor was worried about crime on Hennepin Avenue, she’d clean up 5th and Hennepin. If you’ve been there, you know what I’m talking about. This too will be a total fail for Hodges. 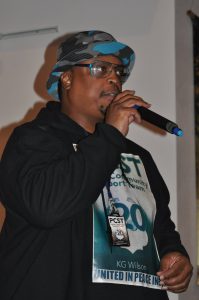 Community activist and safe-streets advocate Kay G. Wilson said, “Many of the people here getting and controlling the funding money over and over again every year don’t feel like they owe society anything because they were never a part of the problem; as for me I was a huge part of the problem so I owe forever! Its not about receiving money or funding for me its about paying back my debt to society. I owe for 14 years now I’ve been paying with my life on the frontline daily in Minneapolis!”

Wilson, who is consistently overlooked for state and local funding has been campaigning for justice in the black community for a long time. He has never been offered or taken any of this “blood money,” but would more than likely do better then the current group of poverty-hacks who don’t live in the community and are more interested in their bottom line of their nonprofit agency and people are very low on the food chain.

Wilson also said, “The kids downtown only respect those they respect. Most of them working downtown is a joke to them. There needs to be brothers and sisters that are serious and about real change present downtown.  I’ve seen the mess down there and the kids are looking for weak, nice, and friendly to victimize and to laugh afterwards! These type of challenges do not need work training, they’re not at that point yet. Its time to bring serious ‘BIG Homies’ downtown for real. I’m ready but they don’t want me to assemble a group of real change makers here, they never call me.”

For people in the black community who actually are fiscal conservatives and what to see change by providing a hand-up for the lower one-third of the black community, funding never reaches them. No matter what the mayor says, she has given blood-money to agencies that don’t deserve the grant in order to maintain her relationship with the petty-bougie Negro leadership that she hopes will get out and vote for her. One thing for sure, Minneapolis mayor Betsy Hodges continues to make serious mistakes, one is underestimating Raymond Dehn, Jacob Frey, Nekima Levy-Pounds and Al Flowers.