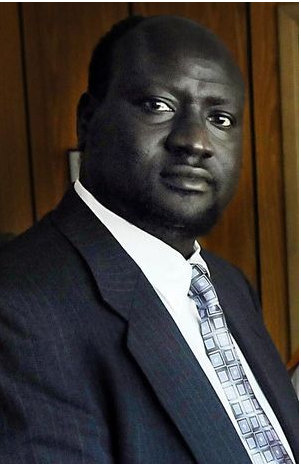 MANKATO — Sudanese immigrant Chuol Yat easily relates with the struggles of young people in his home country, especially when it comes to learning how to read and write.

Yat, now 44, was 15 years old before he had his first chance at a formal education.

“My father was a farmer. There was no school in our village,” he said.

For about 10 years before he came to the Unites States in 1995, under the sponsorship of Catholic Charities, Yat lived in Ethiopian and Kenyan refugee camps.

“I learned the alphabet while I was in a camp,” he said.

Now a resident of Mankato with a degree in sociology from Minnesota State University, he heads a local mission to help build the infrastructure for South Sudan. His nonprofit, Nile Christian Hope Development, was formed in 2006 by refugees who came to the area fleeing civil war.

Today, food, water and electricity remain in short supply in South Sudan and disease is rampant.

At the top of NCHD’s wish list is education for the new nation’s children.

Members of First Presbyterian Church in Mankato, where Yat serves as a deacon, have joined in an effort to build an academy for young girls who live in one Sudanese village, Mandeng.

The community is relatively peaceful and its families want their daughters to be able to read and write. However, parents worry about girls’ safety, since classrooms can be miles away from their front doors.

“In our culture, sometimes, fathers don’t want their daughters to walk that far. With boys, they don’t care so much,” Yat said.

Mandeng families will register their 10-year-old girls in a lottery that will determine who will attend the school.

Villagers will use local materials to construct the planned space for about 20 students, expected to be completed in 2016. Most homes in Mandeng are round structures, but the school will be a long and narrow building that can be added to as the number of students grows.

The academy also will serve as a meeting place for villagers and as a shelter from the heat and rain.

Invited speakers include Edward McDonald, executive director of Council for Minnesotans of African Heritage, and Michael Fagin, who will discuss the upcoming Pan African conference in Mankato.

Attendees at the event may join in discussions about the peace process for South Sudan while they enjoy an African-style meal. Food from Somalia, a predominately Muslim country, will be served along with dishes from South Sudan, which is home to many Presbyterian congregations.

“We are OK with each other. This is a way for all of the community to come together. We are celebrating diversity — Somalis’, everyone’s,” Yat said.

The school is but one of Yat’s projects for his native country. He is making tentative plans for a humanitarian trip home next year. During his three-month stay, he will be part of a Mankato Lions Club program that fits donated eyeglasses on hundreds of South Sudanese.

Yat participated in a similar Mankato Lions Club mission in 2011. Earlier that year, people in the southern portion of the country had voted to secede from Sudan and by July, South Sudan had officially became a new nation.