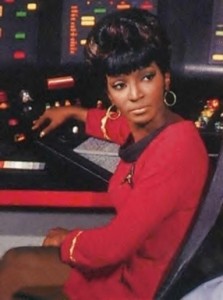 Boy’s from all walks of life dreamed about Lt. Uhura (Nichelle Nichols). Fair use

Although she won’t be heading into the “Final Frontier,” Nichelle Nichols will be going on a NASA Observatory Mission this September. Nichols first starred as Lt. Uhura, Head of Communications for the USS Enterprise in Star Trek, almost 50 years ago.

The 82-year old recently revealed the news on Reddit. “I was on a similar flight, the first air-born observatory, back in 1977,” Nichols explained on Reddit. “It’s an amazing experience. You get a totally different perspective than from earth.”

Nichols will be a passenger on the September 15 flight of NASA’s Stratospheric Observatory for Infrared Astronomy (SOFIA). SOFIA is an aircraft equipped with a powerful telescope used to study the planet’s atmosphere and investigate comets. The surprising thing about all this is that she has only just recovered from a minor stroke in June.