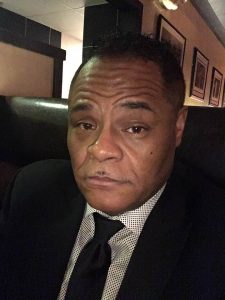 Don Allen, co-host (with Jamar Nelson) of #TCNT’s Black Republican, Black Democrat Show…he’s big, black and conservative, why is the current deputy chairperson of the Minnesota GOP afraid to talk “issues” with Allen?

Minnesota GOP deputy chairperson shows he’s not fit to lead the MNGOP out of a wet paper bag; its not personal, it reflects the action s of a public person over the last 24-hours.The Minnesota GOP has always been afraid of strong black men, to bad they don’t have many.

Chris Fields, Minnesota GOP deputy chairperson caught wind that Don Allen (a republican, supporter of Donald Trump and a former candidate for MNGOP chairmanship) was the co-host of Twin Cities News Talk’s “Black Republican, Black Democrat Show,” on Saturday’s at 6pm on AM 1130, FM 103.5 and backed out according to co-host Jamar Nelson.

Fields, a candidate for the 2017 MNGOP chairmanship told Nelson, “Don attacks me personally, he doesn’t want to talk about the issues.”

We contacted Allen to get his response:

“The Minnesota GOP is not being operated at peek-proficiency. The current leadership is not interested in anything but their low-clout in a small circle of people that don’t care about much. I have never attacked Chris personally, and I’ve always stayed on the issues. Chris is using this for an excuse because he nor Keith Downey can answer any of my questions about a long and antiquated process that has failed not only Minnesota Republican, but also many others who look the GOP way. This spineless act by the deputy chairman of the MNGOP only reflects on his ability to lead, which now should be a party-wide question. I’ve always wanted to talk about the issues and the hesitation might be because most of my issues are black issues,” said Allen.

Fields has cancelled his appearance on the Black Republican, Black Democrat Show today (Saturday), because of his deep-seeded fear of another republican. This in itself is telling; does the MN GOP need leadership that avoids the issues?

Hear more about this tonight on the Black Republican, Black Democrat Show with Don Allen and Jamar Nelson at 6pm…you can listen at www.twincitiesnewstalk.com.