POBN Editor Notes: The Minneapolis City Council and the Hodges administration was okay with letting civil rights director Velma Korbel be reappointed, despite bleak and chaotic procedures. Minneapolis’ chief of police has been outstanding in her duties for Minneapolis residents, why is she being considered for elimination? 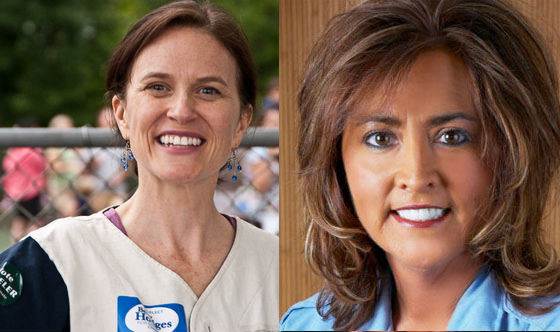 Pictured: Minneapolis mayor Betsy “equity” Hodges and Chief Janeé Harteau. Is the mayor being influenced by outside organizations and pillow talk?

Minneapolis, Minn. – There are rumors that Minneapolis Police Department (MPD) Chief Janeé Harteau will not be reappointed by Mayor Betsy Hodges once Chief Harteau’s term is up, December 31, Dec. 2015?.

We are both surprised and troubled by even the remotest possibility that this type of devastating decision is even being considered.  Chief Harteau has done more than work hard:  she has put in place an excellent administrative team that has allowed the MPD to work closely with the community and establish a well earned reputation for the MPD.

Chief Harteau asked the Department of Justice to establish a  monitory program of the Office of Justice Programs (OJP).  Minneapolis is one of six cities.  Assuming all goes well, the city will receive half a million dollars to continue the work in enabling improvements in police accountability, in order to integrate  model practices to help prevent officer misconduct.

I know a lot about this.  For five years I was on the PCRC (Police Community Relations Council), and served  much of that time Co-Chair.  And now, answering Chief Harteau’s request, the DOJ granted OJP participation I serve on the Steering Committee that is monitoring police activities, with five sub-committees, resources, communications, community engagement, performance monitoring, early prevention, and police conduct review.  Six cities are involved.  If all stays as well as it has been, the MPD will receive half a million dollars to continue the work.

So why would the Major risk all of that?  What’s the hidden agenda?  We know there are only three reasons to not renew a Chief’s contract:  for cause, they want to retire, to politicize the police department, which would be a disaster, as it is for all cities that try to, or for personal reasons best left to experts on “mean girls.”

We know we don’t live in a perfect city in a perfect world. We also know we are under siege from Mexican drug cartels supplying gangs with drugs and guns.  We need the kind of action Chief Harteau called for and have a plan to attempt to make this a better city for all.  We believe that is the right direction.  So what are the politics for this move?  Who is whispering into the mayor’ ear to make a decision that would be a terrible reversal of what we say as city we are about?

Janae Harteau, we repeat, has earned a second term, and we hope that the rumors of her departure are just that, rumors without foundation, for if these rumors become fact, it will set the MPD back for at least a decade.

We think it is nice that John Harrington is being mentioned as a successor, but we thing that John is serving well his mission as Chief of the Metropolitan Transit Police.  We are a big enough city and a big enough metro area, that we can utilize two or more who are able to get the job done.  We will watch the situation very closely.  Continue to read our observations on this Blog and our columns.