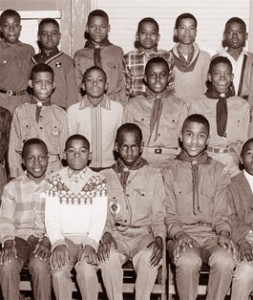 When is the last time you saw a black boy scout? #somethingisverywrong

In the 1500s, African Americans were thought of as being sinister and wicked due to the color of their skin (Skolnick & Currie, 2011, p. 50). In the late 1600s, African Americans made their first appearance in Virginia and became the primary source of labor supply and were then enslaved. Their life in America began working four to seven years for their owners to pay their way to America. Along with indentured slaves, they were forced to wear iron collars, tortured and often beaten during the years of slavery. They had to use passes to gain permission to leave their plantations and were punished severely if caught without them (Skolnick & Currie, 2011, p. 53). When African Americans had to face punishment for a crime, they were treated more severely than indentured slaves. White and black slaves were joining forces to escape the plantations. They were both receiving harsh punishments when caught but black slaves were always given more severe treatment for their crimes. Sometimes it was an extra form of torture such as added lashes to their whippings or extended time to their sentences (usually a lifetime) added to their time to be served as slaves to their owners. The courts started punishing African American slaves as “examples” for others who may follow in their footsteps (Skolnick & Currie, 2011, p. 55). They were prohibited from owning arms degraded, and treated as property by their plantation owners. Slave families were often separated by sale at the auction block and marriages between them were not legally recognized. Laws were developed to restrict slaves from having rights such as giving them books, including a Bible, and teaching them how to read. They could not sell or buy anything and other rights we enjoy today. If they did not obey these slave codes or laws, they faced severe punishment such as being whipped, mutilated, or even killed. For women, it meant being disgraced through repeated torture and rape (McKnown-Johnson & Rhodes, 2010, p. 129). Slavery became wide-spread across the South and would hold strong until the Civil War (Takaki, 2008, p. 7). By this time, more than 500,000 Africans were brought to America (McKnown-Johnson & Rhodes, 2010, p. 129).

The Civil War was the beginning of changes for African Americans when they were allowed to fight for freedom from slavery and inequality. At first, Lincoln was against the submission of African Americans into the army to fight. Once he saw that we were close to losing the war, he had no choice but to allow them to enlist and fight for freedom. If it had not been for African Americans, the Civil War would have been lost (Takaki, 2008, p. 15). Despite winning the Civil War, Africans still had a long fight ahead of them and faced many more battles. Their future was filled with lynching’s, race riots, what is known as the “Color Line”. Furthermore, they continued their fight for freedom as they joined forces with other races along the way (Takaki, 2008, p. 7).

The Emancipation Proclamation of 1863 finally brought an end to slavery for African Americans. By 1868, the Thirteenth and Fourteenth Amendments of the Constitution had permanently abolished slavery and further protected the rights of all slaves. This was short lived for in 1896, the Jim Crow Law imposed segregation in all economic, public and social areas that African Americans had fought so hard to gain equality in. Various forms of acts were carried out to control slaves and keep them from challenging these laws. Some of these acts included lynghings and arbitrary arrests (McKnown-Johnson & Rhodes, 2010, p. 129).

Soon after Martin Luther King, Jr. spoke of his dream, the Civil Rights Act was passed by Congress and it led the way to fulfilling that dream. It wasn’t complete as much more needed to be done. There was still inequality towards African Americans and other minorities regarding interracial marriages, education, and employment. The Civil Rights Act was just a stepping stone towards equality and freedom for African Americans (Takaki, 2008, p. 17).

Generations of African Americans have passed and years of historic slavery have gone by and yet, reminders of African folklore, religion, language, and music remain. Unlike whites, African Americans brought with them the extended family network which involves caring for their children and older adults (McKnown-Johnson & Rhodes, 2010, p. 116). Compared to other cultures, African American children are living in grandparent’s homes as they are traditionally chosen to be the caregivers (McKnown-Johnson & Rhodes, 2010, p. 117).

Second to family, religion is next in line of importance to African Americans. The majority are members of Protestant and Baptist churches and more apt to attend than whites. African American churches also serve as community service centers and provide formal and informal social services for their community. There are several other religious groups that African Americans play a role in and two of them are Muslims and American-Muslims (McKnown-Johnson & Rhodes, 2010, p. 117).

African Americans hold strong to many values along with those shared earlier involving family and religion. Some of the other values important to their culture are achievement and work orientation. When referring to low-income African Americans, it was found that the majority preferred work to welfare. Parents also highly valued education for their children and expected them to achieve high goals. In the working-class level, African Americans had more expectations than whites for their children to attend college. Furthermore, the working-poor blacks were more apt than whites to have more than one wage earner in the family (McKnown-Johnson & Rhodes, 2010, p. 117).

Once African Americans were protected from discrimination, it didn’t mean they were protected from prejudice mistreatment. They had to repeatedly deal with their churches being burned down and being mistreated by law enforcement personnel because their skin was a different color, otherwise known as “racial profiling”. Federal studies and lawsuits found evidence of racial discrimination in that blacks get high-rate loans as opposed to whites and that lenders now target blacks for home buying so that they can lock in on the higher-rate loans. When looking at electoral standpoints, blacks who were elected to office mainly served their own communities and districts, and only hold a small share of offices in the United States.

The election of President Obama in 2008 marked a new beginning for African Americans and has yet to unfold how the role of African American leaders will change in the future (McKnown-Johnson & Rhodes, 2010, p. 130).

Be the first to comment on "African Americans: American Society and Cultural Diversity"